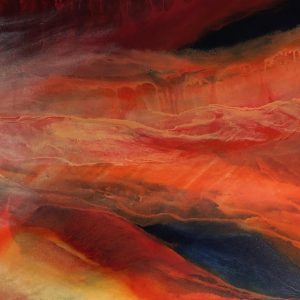 Toni Littlejohn explores the interaction of paint, water and gravity to form topologies and personal earthscapes. She begins by pouring paint and water on the canvas where they spread on the surface, releasing the visceral entropy of their interaction.

As the canvas is tilted up, the paint responds to gravity as if flowing in rhythmic rivulets. Intuitively sensing the moment, Littlejohn adjusts the angle of inclination, often reversing the paint’s direction.

The process is repeated several times with each layer of color, and in this way her creative practice becomes a metaphor of the geological alchemy that created the earth in a sensuous cacophony of fire, water, air, earth. Littlejohn hence becomes a conduit for the formative powers and forces of the coalescing planet itself: heat, electricity, fusion.

Ultimately the colors meld into geological events that bear resemblance to what Toni describes as “something beyond language, a stirring in my internal landscape which reminds me that I, too, hold boiling magmas, oceans to infinity, and the gift of sunlight in my own being.”

She dedicates her work to the hope that we humans will have the wisdom to realize our collective connection to the planet and the need for us all to participate in its well-being.