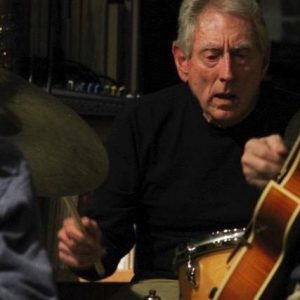 Drummer Tony Johnson leads a quartet on the 4th Friday of each month, and tonight, it’s the “Irregulars” — a quartet led by Tony with long-time associates Charlie McCarthy on reeds, Glen Deardorff on guitar and Al Obidinsky on bass making the scene from swing to bop to bossa.

Jazz  you can count on!

A little history: This quartet, vital as it certainly is, is in a significant way a legacy outfit descended from the Chuck Peterson Trio of yore.

That is to say, “jazz in the bookshop” as regular “thing” all started on a Friday evening in October 2002, in the old shop on Diamond Street, when neighborhood saxophonist Chuck Peterson started a weekly, Friday evening tradition that continues to this day. The trio early on became a quartet and then a quintet when tenor player and arranger Bill Perkins settled beautifully into the front line with Chuck, providing terrific charts and impeccable musicianship.

Bill retired in 2007 when Parkinson’s took its toll, though he continued to listen to our then-primitive live stream for years until the technology broke down (Bill regretted that loss greatly, but it wasn’t until the pandemic that we were able to make a good live stream the reality that it is now).

When Bill retired, Howie Dudune, a mentor of Chuck’s when Chuck was starting out, took the chair and played sweetly with the band for years as it solidified its personnel to comprise a rhythm section of Tony Johnson on drums, Dean Reilly on bass and Glen Deardorff on guitar and always a second horn. Dorothy Lefkovits often sang with the band, and those were very special nights, indeed.

(You’re gonna have to click through to the B&B website to get this part of the story!)

Now, Tony leads a quartet in the traditional last-Friday-of-the-month slot, and every other month the personnel includes Glen on guitar plus two of their contemporaries, reeds player Charlie McCarthy and bassist Al Obidinsky. The tradition swings on, covering the bases from bop to hard bop to straight-ahead swingin’ jazz classics.