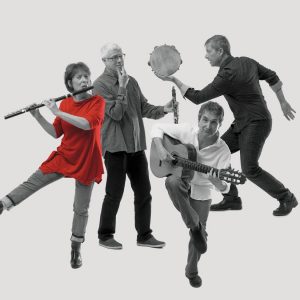 Choro, the first uniquely Brazilian popular music and the root of samba and bossa nova, has its origins in the late 1800s.

The genre, a captivating blend of European salon and chamber music with Afro-Brazilian rhythmic energy and a touch of jazz, is still being renewed and updated, and is spreading internationally at a very healthy pace.

The Berkeley Choro Ensemble, formed in 2010, has dedicated itself to the performance of modern choro compositions and collaborations with renowned Brazilian performers and composers.

Flutist and group founder Jane Lenoir is classically trained and comfortable in many genres; she has performed with symphony orchestras, new music ensembles, chamber and early music groups, as well as jazz, latin and Brazilian groups.

Saxophonist/clarinetist Harvey Wainapel has his feet firmly planted in two musical worlds. He has worked with many jazz and Brazilian masters. To date Harvey has presented his work in clubs, festivals and studios in 22 countries.

A native of Rio de Janeiro, Ricardo Peixoto (7-string acoustic guitar) came to the US on a scholarship to the Berklee College of Music, and later settled in the Bay Area. As a guitarist and composer he has integrated his Brazilian roots with the improvisational freedom of jazz.

Percussionist Brian Rice has devoted much of his musical career to playing Brazilian music and choro in particular. Brian is the co-founder (along with Jane Lenoir) and artistic director of the Berkeley Festival of Choro, now in its fourth year presenting choro music to the San Francisco Bay Area.