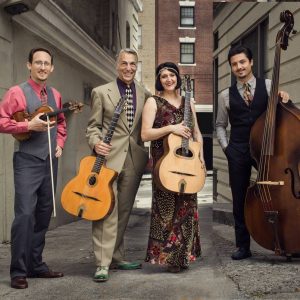 Le Jazz Hot Quartet is a quartet drawn from The Hot Club of San Francisco.

Evan Price is a versatile violinist and composer best known for his work with The Turtle Island Quartet and The Hot Club of San Francisco. An accomplished player of various non-classical genres, he paid early dues as a contest fiddler. He also performed with many of his fiddling heroes including Stephane Grappelli, Vassar Clements, and Johnny Gimble.

After ten years touring with Turtle Island, he continues to make his name as a leading voice in gypsy jazz, primarily through his nineteen plus years of performing and recording with the Hot Club.

Isabelle Fontaine was born and raised in the French countryside with the voices of Edith Piaf, Charles Trenet, and Yves Montand ringing in her ears. During her college years, she joined a group of friends and started performing as a vocalist. She abandoned her plans of teaching English and instead started a career, singing and playing the snare drum throughout France, Spain and Switzerland. Along the way, she picked up the guitar and applied her impeccable sense of rhythm to the stringed instrument. She joined the Hot Club in 2009.

Sam Rocha, a native of Fresno, has been playing string bass since age 16. By his senior year of high school, he had received awards for outstanding musicianship and was offered scholarships by the CalArts and Berklee schools of music. Sam has performed at major jazz festivals all across the United States and Canada. He currently resides in the San Francisco Bay Area where he is a freelance musician.

Paul Mehling began playing guitar at age six after hearing the Beatles on TV. Steeped in a home full of classic jazz recordings yet keenly aware of pop music, he was drawn to the music of Django Reinhardt & Stephane Grappelli. He founded the Hot Club of San Francisco in 1989. Dubbed the “Godfather of American gypsy jazz” by PBS for his early contributions to spreading this style of guitar playing through his private lessons and instructional DVDs, etc.