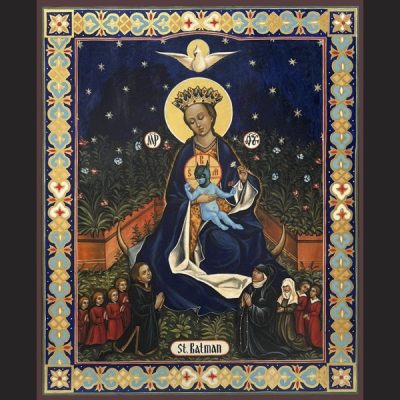 Throughout Slavic cultures in which the Eastern Orthodox Church had a dominant influence, painted icons performed the leading role in portraying stories and events of the New Testament through codified iconography for a non-literate audience.

Examples of theses paintings, created in the Byzantine tradition, exist from as early as the sixth century, nearly three hundred years before St. Cyril introduced a written language to the region. The inherent seductive beauty of these icons belied their evangelistic purpose.

Pervasive in local churches as well as many households they served both a decorative function, with their elaborate gold leaf and jewel like pigmentation, and also as objects of almost mystical veneration.

In this solo exhibition at the Kim Eagles-Smith Gallery, Ukrainian born Bay Area artist, Valentin Popov, has taken this traditional object and created his own mythology, replacing the key Christian entities with superheroes from comic books of his youth.

Popov creates parallel narratives of the Madonna and Child with the birth of a fully formed infant Batman, while St. George’s slaying of the dragon is replaced by Batman slaying the Joker. These contemporary riffs on a medieval art form employ the same painstaking techniques of their sixth century’s forbearers including traditional gold leafing and jewel like painting detail applied to vintage wooden panels often elaborately carved.

Born in Kyiv in 1956, Valentin Popov was the son of a prominent Art Professor at the Academy of Fine Art of Ukraine where he went on to be classically trained. Popov also studied at the Kyiv State School of Art, and is a foreign member of the National Academy of Art Ukraine. He has lived, worked, and exhibited in the San Francisco Bay Area since the late 1980s.

Ten percent of all revenues from this exhibition will benefit the Ukrainian Emergency Art Fund to foster relief for the community arts sector in Ukraine.

Reception with the Artist & Art Lecture: 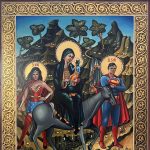 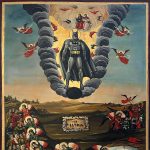 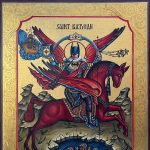