Why There Are Words: "Back from Vacation" 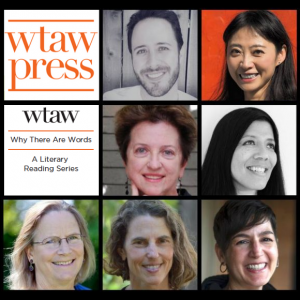 Seven acclaimed authors read from their works to welcome us “Back from Vacation!”

Join Why There Are Words on August 9, at Studio 333 in Sausalito when seven acclaimed authors read from their works to welcome us “Back from Vacation!”

Mathieu Cailler’s poetry and prose have been featured in numerous national and international publications, including the Los Angeles Times and The Saturday Evening Post. His newest book, May I Have This Dance? (About Editions, 2017), was recently named poetry winner of the New England Book Festival.

Geraldine Connolly is the author of a chapbook and four poetry collections including the recently published Aileron (Terrapin Books, March 2018). Her work has appeared in in Poetry, Shenandoah, The Gettysburg Review, and The Cortland Review. She lives in Tucson, Arizona.

Yang Huang grew up in China’s Jiangsu province and participated in the 1989 student uprisings. Her linked family story collection, My Old Faithful (University of Massachusetts Press, February 2018), won the Juniper Prize for Fiction. Her essays and short stories have appeared in Poets & Writers, The Margins, Eleven Eleven, and others.

Audrey Kalman writes literary fiction with a dark edge, often about what goes awry when human connection is missing from our lives. She is the author of two novels—What Remains Unsaid (Sand Hill Review Press 2017) and Dance of Souls (CreateSpace, 2011)—and a book of short stories, Tiny Shoes Dancing (Terrella Media, August 2018).

Valerie Wallace’s debut poetry collection House of McQueen (Four Way Books, March 2018) was chosen by Vievee Francis for the Four Way Books Intro Prize in Poetry. Her work was chosen by Margaret Atwood for the 2012 Atty Award. She lives and works in Chicago.

Maw Shein Win is a Burmese American poet and educator who lives and works in the Bay Area. Her writing has appeared in many journals and anthologies, including Cimarron Review, Poetry International, Fanzine. Her full-length collection Invisible Gifts: Poems was recently published this May by Manic D Press. She is the first poet laureate of El Cerrito.

Why There Are Words (WTAW) is an award-winning national reading series founded in Sausalito in 2010 by Peg Alford Pursell, now expanded to six additional major cities in the U.S., with more planned in the future. The series draws a full house of Bay Area residents every second Thursday to Studio 333, located at 333 Caledonia Street, Sausalito. The series is part of the 501(c)3 non-profit WTAW Press.