Why There Are Words: Last Things 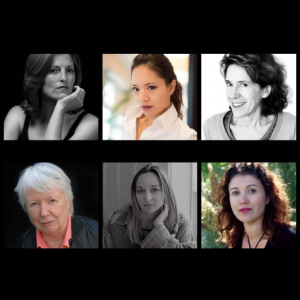 What does “last” really mean? Six talented authors answer with a lively night of readings

Francesca Bell’s poems and translations appear in many journals, including B O D Y, Massachusetts Review, New Ohio Review, North American Review, Poetry Northwest, Prairie Schooner, and Rattle. She is the former poetry editor of River Styx, the translator of a collection of poems by Palestinian poet Shatha Abu Hnaish (Dar Fadaat, 2017), and the author of the collection Bright Stain (Red Hen Press, 2019).

Yu-Han (Eugenia) Chao received her BA in Foreign Languages and Literatures from National Taiwan University and her MFA in fiction from Penn State University. The Backwaters Press published her poetry book, We Grow Old: Fifty-Three Love Poems, and Another Calligraphy Press, Dancing Girls Press, and Boaat Press published her chapbooks. She maintains a blog about nursing and writing at yuhanchao.blogspot.com. She currently lives in California, where she works as a registered nurse and educator.

Cai Emmons is the author of the novels His Mother’s Son and The Stylist and, most recently, Weather Woman. A graduate of Yale University, with MFAs from New York University and the University of Oregon, Cai is formerly a playwright and screenwriter. Her short work has appeared in such publications as TriQuarterly, Narrative, Arts and Culture, among others. She teaches in the University of Oregon’s Creative Writing Program.

Judy Grahn is an internationally known poet, writer, and social theorist. Her work has won numerous awards and honors, including an American Book Review Award, two American Book Awards, a Stonewall (American Library) Award, the Bill Whitehead Lifetime Achievement in Lesbian Letters Award, and two Lambda book awards. She is currently Associated Distinguished Professor, Integral and Transpersonal Psychology, California Institute of Integral Studies in SF, where in the 1990s she earned her PhD in Integral Studies. She served as co-director for an MA program in Women’s Spirituality for thirteen years, and for an MFA in Creative Inquiry for five years.

Brittany Ackerman is a writer from Riverdale, New York.  She earned her BA in English from Indiana University and graduated from Florida Atlantic University’s MFA program in Creative Writing.  She is a Critical Studies instructor at AMDA College and Conservatory of the Performing Arts where she teaches Archetypal Psychology as well as Applied Logic and Critical Thinking.  She was the 2017 Nonfiction Award Winner for Red Hen Press, as well as the AWP Intro Journals Project Award Nominee in 2015.  She currently lives in Los Angeles, California.

Florencia Ramirez, author of Eat Less Water, is a trained researcher at the University of Chicago’s School of Public Policy. Ramirez has been interviewed by NPR, American Public Media, KCRW’s Good Food, New York and Bay Area Pacifica Radio, Entertainment Weekly, CBS and KTLA Morning News and several popular podcasts. Ramirez won the Creative Nonfiction Gift of Freedom Award from A Room of Her Own Foundation. She was the recipient of the 2018 Environmental Hero Award from the Santa Barbara Community Environmental Council. Eat Less Water was chosen as the Kirkus Review Indie Best Book of the month for April 2019 from their list of 10,000+ books. Ramirez is currently working to transition schools and parks from chemicals to organic landscaping in and around Oxnard, California with funding awarded by Patagonia. Her upcoming books include How to Eat Less Water: A Guide to Save Water For the Planet From our Kitchens (working title) and Drops of Water, a children’s picture book.  She lives in Oxnard, California, an agricultural town on the Pacific coast that smells of celery, strawberries and fertilizers with her husband and three young children.

Why There Are Words (WTAW) is an award-winning national reading series founded in Sausalito in 2010 by Peg Alford Pursell and expanded to seven additional major cities in the U.S. The series draws a full house of Bay Area residents every second Thursday to Studio 333. The series is a program of the 501(c)(3) non-profit WTAW Press.