Why There Are Words Literary Reading Series' Seventh Anniversary 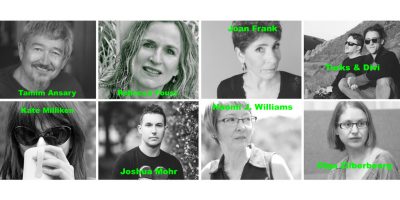 Why There Are Words will celebrate its 7th anniversary featuring readings by eight acclaimed authors and performers, and the publishing arm, WTAW Press will announce its inaugural titles for 2017.

Why There Are Words will celebrate its 7th anniversary Jan. 12, 2017! “Lucky Seven + One to Grow On” will feature the following eight acclaimed authors who’ve appeared at WTAW over the past seven years. Additionally, the publishing arm, WTAW Press will announce the selection of the first two titles it will publish in 2017. AND, we’ll toast the launch of WTAW’s national neighborhood of readings in New York City, Los Angeles, Pittsburgh, Portland and Austin, set to begin in February. Join us at Studio 333 in Sausalito. Doors open at 7pm; readings begin at 7:15. $10 (cash or check).

Afghan-American author Tamim Ansary wrote West of Kabul, East of New York, San Francisco’s  “One City One Book” selection for 2008, as well as the best-selling Destiny Disrupted, A history of the world through Islamic Eyes. His latest book, Road Trips, is about dropping out of a society he wasn’t even a part of.  He lives with his wife Deborah and his cat Raoul in San Francisco, where he teaches memoir writing workshops dedicated to the proposition that if no one remembers it, it didn’t happen. His work-in-progress is a meta-history of the world: Ripple Effects, How we all came to be so interconnected and why we’re still fighting. He hopes that if writing it doesn’t kill him, it will make him stronger.

Rebecca Foust’s most recent book, Paradise Drive, won the Press 53 Poetry Award and is nominated for the 2016 Poets’ Prize. It was widely reviewed, in the Georgia Review, Harvard Review, Hudson Review, Philadelphia Inquirer, San Francisco Chronicle and elsewhere. Recognitions include the American Literary Review Fiction Award, the James Hearst Poetry Prize, and fellowships from the Frost Place, MacDowell, and Sewanee.

Joan Frank is the author of six books of fiction, and a book of collected essays. Her new novel, All the News I Need, won the 2016 Juniper Prize for Fiction, and will be published next month (February 2017) by the University of Massachusetts Press. (Yes, it is possible to pre-order, and Joan will be thrilled and wildly grateful if you do.) Her last novel, Make It Stay, won the Dana Portfolio Award; her last story collection, In Envy Country, won the Richard Sullivan Prize in Short Fiction, the ForeWord Reviews Book of the Year Award, and was named a finalist for the California Book Award. Her last book of collected essays, Because You Have To: A Writing Life, also won the ForeWord Reviews Book of the Year Award. Joan holds an MFA in Fiction from Warren Wilson College in Asheville, NC. Recipient of many grants, fellowships and literary honors, Joan is also a frequent reviewer of literary fiction for the San Francisco Chronicle. She lives in the North Bay Area of California.

Evan and Miles Karp are Turk & Divis, an intersection where chance, rhythm, and processed repetition collide with modified fragments of language to form serendipitous anthems and intimate, often polyvocal meditations inside of those anthems. Old school samples and some of tomorrow’s most unusual hits @ turkanddivis.bandcamp.com. Evan is also the mastermind behind Quiet Lightning and Litseen.

Kate Milliken’s debut collection of stories, If I’d Known You Were Coming, won the John Simmons Award for Short Fiction, judged by Julie Orringer, and was published by the University of Iowa Press. The recipient of fellowships from the Vermont Studio Center, Tin House, Yaddo, and several pushcart nominations, Kate’s stories have appeared in Zyzzyva, Fiction, and the Santa Monica Review, among others. In 2009, Kate and her family moved from Los Angeles to the suburban wilds of Mill Valley, where they knew almost no one. Soon after, in search of a writing community, Kate wrote to an instructor she found online. That instructor was Peg Alford Pursell.

Joshua Mohr is the author of five novels, including Damascus, which The New York Times called “Beat-poet cool.”  He’s also written Fight Song and Some Things that Meant the World to Me, one of O Magazine’s Top 10 reads of 2009 and a San Francisco Chronicle best-seller, as well as Termite Parade, an Editors’ Choice in The New York Times. His novel All This Life won the Northern California Book Award. His first book of nonfiction, a memoir called Sirens, is out this January 2017.

Naomi J. Williams is the author of Landfalls (FSG 2015), long-listed for the Center for Fiction First Novel Prize and the National Book Critics Circle’s John Leonard Award. Her short fiction has appeared in journals such as Zoetrope: All-Story, A Public Space, One Story, The Southern Review, and The Gettysburg Review. A five-time Pushcart Prize nominee and one-time winner, Naomi has an MA in Creative Writing from UC Davis. Naomi was born in Japan and spoke no English until she was six years old. Today she lives in Davis, California, where she teaches creative writing and serves as co-director of the literary series Stories on Stage Davis. She’s hard at work on new writing projects, including a novel about the early 20th-century Japanese poet Yosano Akiko.

Olga Zilberbourg was born in St. Petersburg, Russia and moved to the United States at the age of seventeen. In 2016, her third book of fiction in Russian was published in Moscow-based Vremya Press. Olga’s English-language fiction has appeared in and is forthcoming from Alaska Quarterly Review, World Literature Today, Feminist Studies, California Prose Directory, Narrative Magazine, Santa Monica Review, and other print and online publications. Olga serves as a consulting editor at Narrative Magazine and is a co-moderator of the San Francisco Writers Workshop.

Why There Are Words takes place every second Thursday of the month, when people come from all over the Bay Area to crowd the house. The brainchild of Peg Alford Pursell, this literary goodness celebrates seven years of presenting voices that need to be heard. Why There Are Words is, of 2017, a national neighborhood of readings, taking place in NYC, LA, Pittsburgh, Portland, and Austin. Its publishing arm is WTAW Press.