Why There Are Words Presents: Authors from Nothing Short of 100, with Special Guest R.O. Kwon 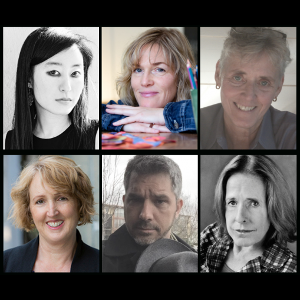 Join us for a stellar night of readings from authors from the anthology Nothing Short of 100, with very special guest, R.O. Kwon!

Join Why There Are Words for a stellar night of readings from authors from the anthology Nothing Short of 100, with very special guest, R.O. Kwon.

See website for more details, including the authors’ full bios. For more details about WTAW Press, of which the reading series is a program, visit www.wtawpress.org.

Special guest R.O. Kwon’s nationally bestselling first novel, The Incendiaries, was published in July 2018 by Riverhead (U.S.). Her writing has appeared in The Guardian, Vice, BuzzFeed, and elsewhere. She has received awards and fellowships from the National Endowment for the Arts, Yaddo, MacDowell, and the Bread Loaf Writers’ Conference.

Karen Benke is the author of several creative writing adventure books from Shambhala Publications, including Write Back Soon! Adventures in Letter Writing (2015). Besides 100 Word Story, her writing has appeared in Ploughshares, Rattle, West Marin Review, and elsewhere.

Andrew O. Dugas’ work has appeared in 100 Word Story, Unlikely Stories, Mayfly, and many other places. His novel Sleepwalking in Paradise was published in 2014 by Numina Press. He recently snail-mailed 1,001 original hand-inscribed haiku postcards to as many randomly selected recipients. Maybe you got one?

Jane McDermott is the 2014 Michael Rubin book award winner for her collection of microfiction Look Busy: One hundred 100-word stories by and for the easily distracted (14 Hills, 2014). Her fiction can be found in 100 Word Story, Foglifter, Weirderary, and others.

Lynn Mundell‘s writing has appeared in The Sun, Booth, Tin House, and elsewhere. Her story “The Old Days,” is included in the W.W. Norton anthology New Micro: Exceptionally Short Fiction (August 2018). She is co-editor of 100 Word Story and its anthology Nothing Short Of: Selected Tales from 100 Word Story (Outpost19, April 2018).

Cornelia Nixon’s fourth novel, The Use of Fame, is out in hardcover from Counterpoint Press (2017). She is also the author of Jarrettsville (Counterpoint, 2009), Angels Go Naked (Counterpoint, 2000), Now You See It (Perennial, 1992), and a book of literary criticism. She has won two O. Henry Awards two Pushcart Prizes, a Nelson Algren Prize, and the Carl Sandburg Award for Fiction.

Why There Are Words (WTAW) is an award-winning national reading series founded in Sausalito in 2010 by Peg Alford Pursell, now expanded to six additional major cities in the U.S., with more planned in the future.  The series draws a full house of Bay Area residents every second Thursday to Studio 333.  The series is part of the 501(c)3 non-profit WTAW Press.

Authors’ books will be available for sale and signing.