Why There Are Words: Strange 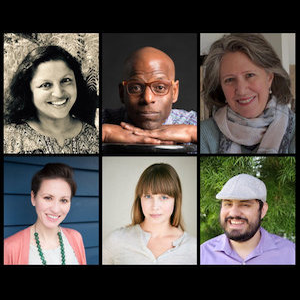 Join Why There Are Words on May 9, 2019, at Studio 333 in Sausalito for an extraordinary night of uncanny readings!

Aren’t the strangest experiences often the most relatable—the most memorable? Join Why There Are Words on May 9, 2019, at Studio 333 in Sausalito for an extraordinary night of uncanny readings as six spectacular authors read on the theme of “Strange.” Doors open at 7pm; readings begin at 7:15. $10 entry fee at the door. Cash bar.

Kate Hope Day is the author of the debut novel If, Then, published in March 2019 by Random House. She was an associate producer at HBO, and holds a BA from Bryn Mawr College and a PhD from the University of Pittsburgh. She lives in Oregon with her husband and their two children.

Michael DuBon is a first-generation Nevada native of Guatemalan descent. He is currently a MFA candidate in creative nonfiction at Saint Mary’s College of California, graduating in May. His poetry has appeared in The Meadow, and he enjoys writing in both English and Spanish. He is currently working on his memoir, The DuBonicles: A Guide to Exile. At his most natural, he is always laughing and smiling. He hopes to share the smiles and laughter through his writing.

Melissa Duclos is the author of the novel Besotted (7.13 Books, March 2019). Her work has appeared in The Washington Post, Salon, The Offing, and Bustle, among others. She is the founder of Magnify: Small Presses, Bigger, a monthly newsletter celebrating small press books; and co-founder of Amplify: Women’s Voices, Louder, a series of writing retreats aimed at putting woman-identifying writers on the path to publication. She has an MFA from Columbia University and lives in Portland, Oregon.

Devi S. Laskar is the author of the debut novel The Atlas of Reds and Blues, published by Counterpoint Press in February 2019. A native of Chapel Hill, NC, she holds an MFA from Columbia University, an MA in South Asian Studies from the University of Illinois, and a BA in journalism and English from the UNC-CH. A former newspaper reporter, she is now a poet, photographer, and artist. Her work has appeared or is forthcoming from such journals as Fairy Tale Review, Rattle, Tin House, and Crab Orchard Review. She is also the author of the two chapbooks: Gas & Food, No Lodging and Anastasia Maps, both published by Finishing Line Pressin 2017. She has been nominated for a Pushcart Prize and Best of the Net. She is an alumna of both TheOpEdProject and VONA, and is also an alumna of poetry workshops at the Community of Writers at Squaw Valley. She now lives in California.

Cheryl A. Ossola is the author of the debut novel The Wild Impossibility (Regal House Publishing, May 2019). Her work has been published in Fourteen Hills, Switchback, and Dance Magazine, among others. A member of the San Francisco-based Writers Grotto, she now lives and writes in Italy.

Amos White is an awarded American haiku poet and author, producer, and civil rights activist. Recognized for its vivid literary imagery and breathless poetic interpretations, his work is published in several national and international anthologies. He is Founder and host of the Heart of the Muse creative’s salon; executive producer and host of Beyond Words: Jazz+Poetry show; president of Bay Area Generations literary reading series; and board member with the Black Speculative Arts Movement (BSAM) and with the AfroSurreal Writers Workshop -Oakland. In his spare time he moonlights as a community organizer with ACLU People Power-Alameda and as a board member on CASA Community Action for a Sustainable Alameda and on the Climate Emergency Mobilization Task Force of Alameda/Contra Costa Counties. He lives, works, and plays in the island city of Alameda, California, with his family.

Why There Are Words (#WTAW) is an award-winning national reading series founded in Sausalito in 2010 by Peg Alford Pursell, now expanded to seven additional major cities in the U.S. The series draws a full house of Bay Area residents every second Thursday to Studio 333, located at 333 Caledonia Street, Sausalito, CA 94965. The series is a program of the 501(c)(3) non-profit WTAW Press, a publisher of exceptional literary books.