Why There Are Words presents "Sugar" 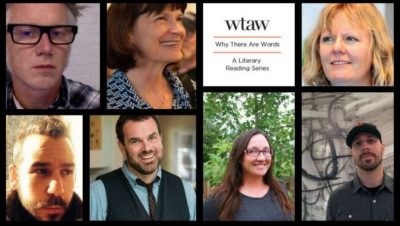 Join Why There Are Words on December 8, 2016, at Studio 333 in Sausalito to hear the following acclaimed authors read from their works on the sweet theme of “Sugar.” Doors open at 7pm; readings begin at 7:15. $10.

Jonathan Cardew’s stories, interviews, and articles appear or are forthcoming in Atticus Review, Flash, The Forge, JMWW, Rocky Mountain Revival, Smokelong Quarterly, and Segue, among others. He holds an MA in Writing from Sheffield Hallam University, and he teaches English at Milwaukee Area Technical College, where he co-edits The Phoenix Literary and Arts Magazine. He was a finalist in this year’s Best Small Fictions.

Russell Dillon is the editor of Big Bell magazine and author of the chapbook, Secret Damage, as well as the full-length collection, Eternal Patrol. Formerly a James Merrill fellow at the Vermont Studio Center, he is also a regular participant in the Squaw Valley Community of Writers Workshop, and his work has appeared in Parthenon West, Green Mountain Review, Coldfront, H_NGM_N, Forklift Ohio, and others.  He began life in New York, continued it in San Francisco, and now continues it further in New York.

Grant Faulkner likes big stories and small stories. He is the Executive Director of National Novel Writing Month and the co-founder of 100 Word Story. His stories and essays have appeared in dozens of publications, including The New York Times, Poets & Writers, Writer’s Digest, The Southwest Review, PANK, and Gargoyle. He’s recently published a collection of one hundred 100-word stories, Fissures, two of which are included in Best Small Fictions 2016. He has a book of essays on creativity coming out with Chronicle Books in the fall of 2017.

Christine Hale is the author of A Piece of Sky, A Grain of Rice: A Memoir in Four Meditations (Apprentice House Press, 2016), which the Los Angeles Review of Books calls “a portrait of a consciousness…[that] will bruise you…even leave you permanently marked.” Her prose has appeared in Role Reboot, Arts & Letters, Spry, Shadowgraph, Hippocampus, and Watershed Review, among other publications. Her debut novel Basil’s Dream (Livingston Press, 2009) received honorable mention in the 2010 Library of Virginia Literary Awards. A fellow of MacDowell, Ucross, Hedgebrook, and the Virginia Center for the Creative Arts, Christine Hale earned her MFA from Warren Wilson College. She teaches in the Antioch University-Los Angeles Low-Residency MFA Program as well as the Great Smokies Writing Program in Asheville, NC.

Matt Hart’s most recent books are Radiant Action (H_NGM_N Books, 2016) and Radiant Companion (Monster House Press, 2016). A co-founder and the editor-in-chief of Forklift, Ohio: A Journal of Poetry, Cooking, & Light Industrial Safety, he lives in Cincinnati where he is Associate Professor in Creative Writing and the Chair of Liberal Arts at the Art Academy of Cincinnati. He plays guitar and shouts in the bands TRAVEL and THE LOUDEST SOUNDER.

Janey Skinner is working on a novel about the struggle for dignity in the midst of war, as one character fights to keep his community safe from violence, and another throws himself into combat. This story draws on her experience working for human rights in Latin America. She is the author of several short stories, including three published in KYSO Flash. One of those, “Carnivores,” is included in Best Small Fictions 2016, edited by Stuart Dybek with Tara Masih. She has also written nonfiction, most recently several chapters in the 2nd edition of Foundations for Community Health Workers (Jossey-Bass, 2016). She was thrilled to attend San Francisco’s only juried writing conference, LitCamp, in 2013 and 2014, and the Napa Valley Writers Conference in 2011. She holds a Bachelor’s degree in Comparative Literature (Brown University) and a Master’s in Public Health (U.C. Berkeley). She teaches at City College of San Francisco.

Why There Are Words takes place every second Thursday of the month, when people come from San Francisco, the North Bay, the East Bay, the South Bay–everywhere–to crowd the house. The brainchild of Peg Alford Pursell, this literary goodness has been going strong for almost seven years. Why There Are Words is going national in 2017, and is now an independent press, WTAW Press.