Why There Are Words: Ultimate 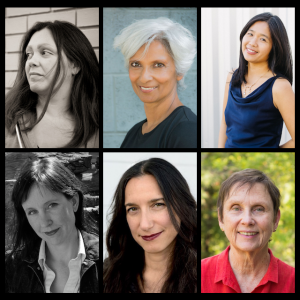 Join Why There Are Words in Sausalito when eight acclaimed authors read from their works to help us close out the year!

Our ultimate event of the year will prove to be the ultimate way to spend your evening!

For more details, including the authors’ full bios, see the WTAW website. The reading series is a program of WTAW Press.

Rae Gouirand is the author of two collections of poetry, Open Winter (Bellday Books, Inc., 2011), winner of the Bellday Prize; and Glass is Glass Water is Water (Spork Press, 2018); and the chapbook Must Apple (Educe Press, 2018), winner of the Oro Fino Competition. She lectures in the Department of English at UC-Davis.

Vanessa Hua’s latest book is the novel A River of Stars (Ballantine Books, August 2018). She is the author of the story collection, Deceit and Other Possibilities (Willow Books, 2016) and columnist for the San Francisco Chronicle. Her work has appeared in The New York Times, The Atlantic, and The Washington Post.

Carrie La Seur is the award-winning author of two critically acclaimed novels, The Home Place (2014) and The Weight of an Infinite Sky (January 2018), both from William Morrow. She is also the author of dozens of essays, book reviews, poems, and law review articles that have appeared in Daily Beast, The Guardian, Harvard Law and Policy Review, and others.

Nancy Tingley has written literary fiction in the closet for decades and has only just come out with the publication of the Jenna Murphy Mysteries. A Head in Cambodia (Swallow Press, 2017), which was nominated for a Lefty Award for best debut mystery, is the first in the series, and A Death in Bali (Swallow Press, March 2018) is the second.

Why There Are Words (WTAW) is an award-winning national reading series founded in Sausalito in 2010 by Peg Alford Pursell, now expanded to six additional major cities in the U.S., with more planned in the future. The series draws a full house of Bay Area residents every second Thursday to Studio 333, Sausalito. The series is part of the 501(c)3 non-profit WTAW Press.