Why There Are Words: Unrest 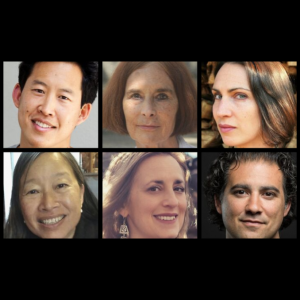 Wake yourself up with a night with six powerhouse authors: theme of “Unrest”

Vincent Chu is a Bay Area writer and author of the debut story collection Like a Champion (7.13 Books, 2018). His fiction has appeared in STILL Magazine, Fjords Review, Pithead Chapel, PANK Magazine, East Bay Review, Stockholm Review, and elsewhere. He is a 2019 Hambidge Center Fellow and has been nominated for the Pushcart Prize and Best of the Net.

Rosa del Duca is a writer, journalist, teacher, and musician. She grew up a tomboy in rural Montana, where she joined the Army National Guard when she was seventeen. During her six-year contract, she became not only a conscientious objector, but a feminist and unlikely rebel. That tumultuous time is the focus of her memoir, Breaking Cadence: One Woman’s War Against the War, and her companion podcast, Breaking Cadence: Insights From a Modern-Day Conscientious Objector. When not writing creatively, she is writing cold hard facts as a broadcast journalist, leading peer writers’ groups, or singing and playing guitar at small venues across the Bay Area.

Lola Haskins’ most recent book is Asylum: Improvisations on John Clare (University of Pittsburgh Press, 2019). She is the author of twelve additional books of poetry and three of prose. Among her honors are the Iowa Poetry Prize, two Florida Book Awards, two National Endowment for the Arts fellowships, several awards for narrative poetry, and the Emily Dickinson Prize from Poetry Society of America. She currently serves as Honorary Chancellor of the Florida State Poets Association. She taught poetry in a low-residency MFA program, Pacific Lutheran University’s Rainier Writers Workshop. She divides her time between Gainesville, Florida, and Skipton, and North Yorkshire in the UK.

Lillian Howan spent her early childhood in Tahiti and later graduated from the University of California, Berkeley, School of Law. Her writings have been published in Asian American Literary Review, Café Irreal, Calyx, New England Review, Vice-Versa, and the anthologies Ms. Aligned 2: Women Writing About Men and Under Western Eyes. She is the author of The Charm Buyers (University of Hawaii Press, 2017).

Lee Daniel Kravetz is the author of the international bestsellers Strange Contagion and Supersurvivors. He has written for print and television, including The New York Times, New York Magazine, The Atlantic, Psychology Today, ​The Daily Beast, The San Francisco Chronicle, and PBS’s Frontline and Sesame Street. His work has been translated in ten languages, and he is a founding board member of the Lit Camp Writers Conference.

Jennifer Wortman is the author of the story collection This. This. This. Is. Love. Love. Love (Split Lip Press, 2019). Her work appears or is forthcoming in TriQuarterly, Glimmer Train, Normal School, DIAGRAM, Electric Literature, Brevity, Copper Nickel, and elsewhere. She lives with her family in Colorado, where she serves as associate fiction editor for Colorado Review and teaches at Lighthouse Writers Workshop.

Why There Are Words (WTAW) is an award-winning national reading series founded in Sausalito in 2010 by Peg Alford Pursell and expanded to seven additional major cities in the U.S. The series draws a full house of Bay Area residents every second Thursday to Studio 333, located at 333 Caledonia Street, Sausalito, CA 94965. The series is a program of the 501(c)(3) non-profit WTAW Press.