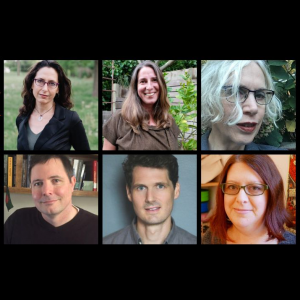 Daphne Kalotay’s books include the award-winning novels Sight Reading and Russian Winter and the fiction collection Calamity and Other Stories, shortlisted for the Story Prize. She teaches at Princeton University but makes her home in Somerville, Massachusetts, and her short story “Relativity” was the 2017 One City One Story Boston selection.

Kim Magowan lives in San Francisco and teaches in the Department of Literatures and Languages at Mills College. Her short story collection Undoing (2018) won the 2017 Moon City Press Fiction Award. Her novel The Light Source is forthcoming from 7.13 Books in 2019. Her story “Madlib” was selected for Best Small Fictions 2019 (Sonder Press). Her story “Surfaces” was selected for Wigleaf’s Top 50 2019.

Valerie Nieman’s third collection, Leopard Lady: A Life in Verse, debuted last fall at the Coney Island Museum, where the curator wrote: “Steeped in sideshow tradition, and addressing issues of race, gender, self-concept, and creative expression, your book is beautifully written.” Her poems have appeared or are forthcoming in many journals, and have been selected for numerous anthologies. She teaches at John C. Campbell Folk School, NC Writers Network, and many other venues, and she teaches creative writing at North Carolina A&T State University. Her fourth novel, To the Bones, arrived in spring from West Virginia University Press.

Mike Smith teaches at Delta State University and is the author of the poetry collection, Pocket Guide to Another Earth, out now from Dos Madres Press, and the memoir, And There Was Evening and There Was Morning, (WTAW Press 2017). He’s published three prior collections of poetry, including Byron in Baghdad and Multiverse, both from BlazeVOX Books (Buffalo, NY). Together with software engineer Brandon Nelson, he created and curates The Zombie Poetry Project.

Alex Tilney is a graduate of the Warren Wilson College MFA Program for Writers and has been a fellow at the MacDowell Colony. His writing has appeared in The Southwest Review, The Journal of the Office for Creative Research, and Gelf Magazine. He lives in Brooklyn with his partner, theater artist Sarah Hughes. His first novel, The Expectations, is forthcoming from Little, Brown in July 2019.

Beth Winegarner is a journalist, author and essayist whose work has appeared in the New Yorker, the Washington Post, the Guardian, Mother Jones, Wired, San Francisco Magazine and many others. Her recent books include The Columbine Effect: How Five Teen Pastimes Got Caught in the Crossfire and Why Teens are Taking Them Back (2013) and Tenacity: Heavy Metal in the Middle East and Africa (2018). She is a member of the Writers Grotto.

Why There Are Words (#WTAW) is an award-winning national reading series founded in Sausalito in 2010 by Peg Alford Pursell, now expanded to seven additional cities in the U.S. The series draws a full house of Bay Area residents every second Thursday to Studio 333, located at 333 Caledonia Street, Sausalito, CA 94965. The series is a program of WTAW Press, a 501(c)(3) publisher of exceptional literary books.