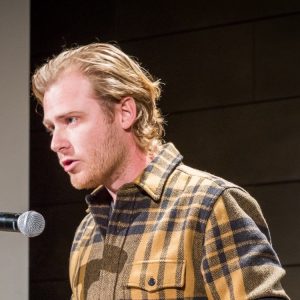 In varied styles and voices, the poems depict people’s bewilderment and pain as addiction creeps into and takes over their lives.

In the Creekside Room – Registration recommended, see Tickets link above.

These moving and dramatic poems tackle the pain of the opioid addiction in West Virginia, how it affects family, addicts and the community. Brewer manages to infuse the poems with beauty and hope as well as speaking in the many voices of the epidemic

Rooted in the physical and spiritual landscape of West Virginia, the poems focus on the small town of Oceana (nicknamed Oxyana for the record number of overdoses there), Oceana acts as a stand-in for West Virginia as a whole, which has the highest OD rate in the country.

The poems are at once dreamlike and visceral, and the images in it draw on the beauty and pain of a West Virginia that is, in Brewer’s words “last on every list,” a state that people in the nation’s capital, only a few hours away, barely acknowledge and clearly don’t care much about.

For more about William Brewer, see this segment on PBS/News Hour or this interview in ZYZZYVA.