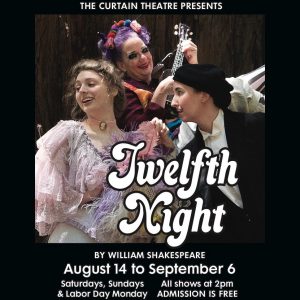 “IF MUSIC BE THE FOOD OF LOVE, PLAY ON.” ― William Shakespeare, Twelfth Night

Admission is FREE/donations accepted – No tickets or reservations!

The Curtain Theatre organization was formed by Mill Valley arts producer John Leonard, set designer Steve Coleman, and artistic director Mikel Clifford. The opening production of Shakespeare’s As You Like It was staged in summer 2000 to celebrate Mill Valley’s centennial. With sponsorship from Mill Valley Arts Commission, the Outdoor Art Club, Parks and Recreation, and generous community donors, the Curtain Theatre has continued to produce free summer shows in the city’s beautiful Old Mill Park Amphitheater. Though the theatre’s focus is on free Shakespeare, it occasionally stretches out into other classical drama.

Admission is FREE / Donations accepted – No tickets or reservations!