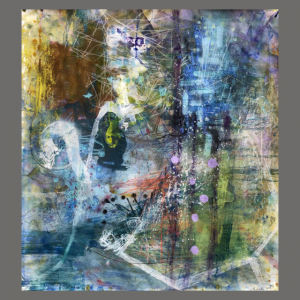 “This body of work has been painted expressly for the gallery. I have followed Willy’s creative efforts for 25-30 years, and excited about finally putting it up on the wall!”  Bob Green

Willy Heeks, based in Rhode Island, has been creating luminous abstract paintings for over thirty years. In recent works he further explores complex spatial relationships through the use of pattern, organic line, and sensuous fields of color. In oil and acrylic, Heeks makes sophisticated, intuitive paintings. He builds the surface with lush paint of vibrant colors in bold brush strokes over atmospheric passages.

Bright, quirky shapes and playful lines hover over romantic ethereal spaces, referencing nature and hinting at narrative that quickly dissolves. With Heeks’ practiced hand, an underlying framework grounds the chaotic, variegated marks, and this structure balances the gestural abstraction and forms in these weighty, elaborate compositions.

Willy Heeks, born in 1951, has gained a national reputation, exhibiting in New York, Los Angeles, and throughout the United States. He received his BFA from the University of Rhode Island in 1973 and attended the Whitney Museum of American Art Independent Study Program that same year. He was an NEA fellowship recipient in 1978, 1987, and 1989, received an Adolph and Esther Gottlieb Foundation Grant in 2004, and a Pollock-Krasner Foundation grant in 1997 and 2001. 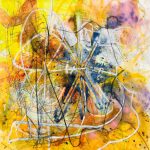