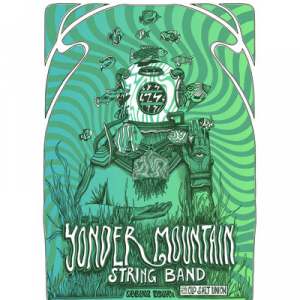 It’s rooted in tradition but as current as tomorrow, animated by electrifying performance, vivid production, and the modernist power that has made Yonder one of the most popular live bands of their generation.

The reconstituted group debuted with 2015’s acclaimed BLACK SHEEP, but truly gelled as they toured, the new players’ personalities seamlessly blending and elevating the intrinsically tight Yonder sound. Yonder made certain to show off the current roster’s growing strength with the 2017 release of MOUNTAIN TRACKS: VOLUME 6, the first installment in their hugely popular live recording series since 2008.

With its melodic flair, expert technique, and forward-thinking fervor, LOVE. AIN’T LOVE is a strikingly assured and well-crafted manifestation of Yonder’s matchless musical vision. Nearly two decades in, Yonder Mountain String Band is still utterly unto themselves, a one-of-a-kind, once-in-a-lifetime combo whose inventiveness, versatility, and sheer imagination shows no sign of winding down.