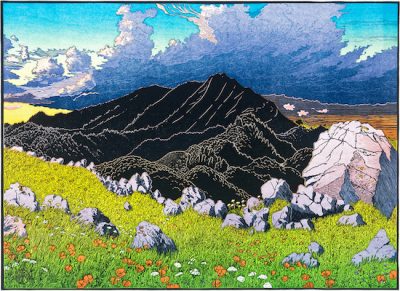 Tom was born and raised in Mill Valley, California, on the slopes of Mt. Tamalpais. The rugged scenery of Marin County and Northern California inspired him from an early age to create landscape prints using linoleum and wood, strongly influenced by the traditional Japanese Ukiyo-ë style of Hokusai and Hiroshige. He studied History at UC Santa Cruz, where he was introduced to fine book printing by William Everson and Jack Stauffacher. In 1975, he produced his first illustrated book on UCSC's Cowell Press.

After traveling extensively in Europe and Africa, Killion returned to Santa Cruz in 1977 and founded his own Quail Press, where he published his second book, "Fortress Marin". In 1978, Killion began graduate studies in African History at Stanford University, completing a doctorate on Ethiopia in 1985. He also continued to make woodcut prints of the California landscape, producing his large-format "The Coast of California" in 1979. During the early 1980s, Tom divided his time between history research in Europe and Africa, and the development of his multi-color woodcut prints.

During 1987-1988, Killion worked as administrator of a medical relief program in a camp for Ethiopian refugees in Sudan and traveled with nationalist rebels in war-torn Eritrea. In 1990, after many years of work, Tom produced "Walls: A Journey Across Three Continents" -- an extensively illustrated travel book combining his African experiences with woodcut printmaking. Killion then devoted four years to teaching African History at Bowdoin College, Maine, and in 1994 was a Fulbright scholar at Asmara University in Eritrea.

In 1995, Tom returned to California and taught in the Humanities Department at San Francisco State University while he worked on a new hand-printed, large-format book, "The High Sierra of California" in collaboration with Pulitzer prize-winning poet Gary Snyder. The new book was published in a trade edition in 2002 and received a number of awards. In 2008 Tom and Gary published a second collaboration, "Tamalpais Walking," and in 2015 his third collaboration with Snyder and Heyday Books, "California's Wild Edge: The Coast in Poetry, History and Prints." Killion is currently working on landscape prints including treescapes, coastal and mountain views. His studio is located on Inverness Ridge near Point Reyes, California.