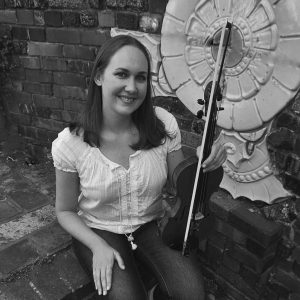 Her world travels led her to play traditional Irish music in Mexico and traditional Mexican music in Ireland, during which time she obtained a Masters degree in Community Music at the Irish World Academy of Music and Dance at the University of Limerick, and became a founding member of Mariachi San Patricio.

She performs in the San Francisco Bay Area with Mariachi Femenil Orgullo Mexicano.  In 2016, she released her original album of Irish-Mexican musical fusion, ¡Fandango Bragh!