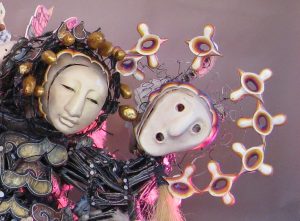 “Exoskeletons, they appear to be more intricate than lace, or more fragile than a thread of a spiders silk in sunlight, whimsical as the ornaments in music boxes and fancy clocks:  Bolinas artist Sha Sha Higby sculptures are complex and layered, informed by her experiences in Japan, Indonesia, Vietnam, Thailand, Laos, and India. Yet more than mere visual delights, these sculptures are made to move with her living body as the driving force. Meticulously crafted over the course of years, her sculptural costumes use paper, wood, leaves, silk, lacquer, ceramics, and gold leaf to make creatures somewhere between the natural and the divine. In a Paper Wing, Higby combines visual art with puppetry, and dance to present and ephemeral but the experience timeless, Watch to see patience rewarded.” - Irene Hsiao of Sf. Weekly.

Sha Sha Higby received a BS in art from Skidmore College and spent five years in Indonesia under a Fulbright Scholarship. She also studied for a year in Japan, and six months in India under an Indo-American Fellowship. She has received numerous awards and grants, including a NEA Fellowship in solo theater and grants from the Zellerbach Family Fund and from The Japan Foundation for collaborative artistic work.

She has performed internationally at the Festival Internazional delle Marionnnette; Divaldo Korzo in Slovakia; the Festival of Sydney in Australia; Singapore Festival of the Arts; Hong Kong Fringe Festival; Tokyo National College Of Art; the Tokyo Textile Institute: Puppet Theater Festival; and the Stara Zagora in Bulgaria,and will be performing at the Yunlin Festival in Taiwan.