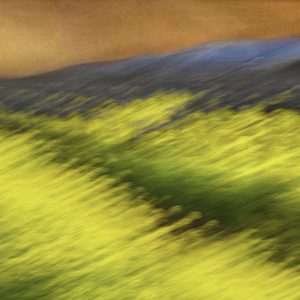 At the age of 14 I was handed a camera; more than 50 years later I have yet to put it down. Along the way, what I photograph, and how, have widened. As a young adult I was fortunate enough to travel throughout Europe, and capturing the essence of other cultures is still a passion today. For three decades I practiced traditional landscape photography, mostly in the American West. But it wasn’t until I retired from a career in communications in 2004 that I truly found my voice.

Frustrated by lousy light one day in the rolling hills of the Palouse, I decided to experiment with camera motion. I got lucky. The first image I made was a good one. I’ve been at it ever since.

For a long time I’ve had a saying about my experience as a photographer: “The best part is being there.” It’s not the act of capturing what I see that counts most. More important are the emotions I experience that make me want to capture what I see. And if my images are able to evoke those same feelings in the viewer, then I know I’ve succeeded.

I grew up outside of New York City and later lived in Chicago, Santa Fe and Sonoma before moving to Mill Valley in 2013.