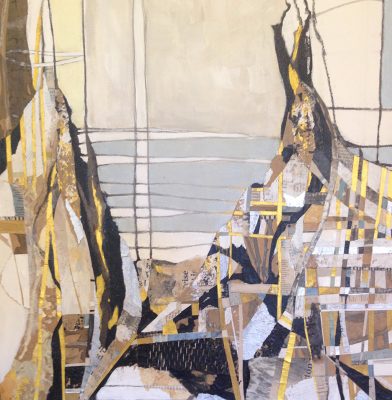 Hannah Rosenberg has always had a love of working with her hands. She studied apparel design at Drexel University, and worked for ten years in New York City designing and developing women’s clothing. She pursued her artwork in her small New York apartment creating, notably, a series of miniature chair sculptures.

Later her career took her to California where she worked as both an apparel designer and product designer while also pursuing her artwork. She transitioned to two-dimensional pieces, working in colored pencil, watercolor and eventually mixed media collage.

Her later works in collage nodded back to her apparel design roots with the use of thread, stitching and fabrics mixed with recycled papers and paint. Through experimentation, her work became rich with texture, color and depth, using collage in her own unique way-in more of a painterly fashion.