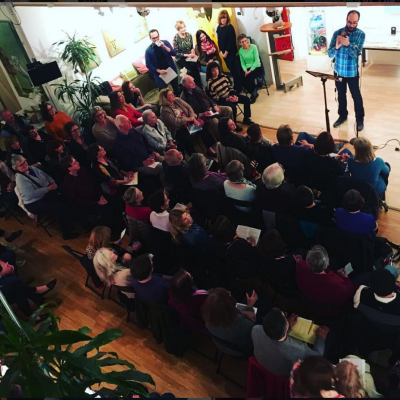 Why There Are Words: 8 years of Live Author Readings

The national reading series Why There Are Words celebrates 8 years of amazing live author readings in Sausalito, where it all began, with host and founder Peg Alford Pursell.

Featured readers for the evening are as follows--but be sure to check out the WTAW website for full bios.

Rob Davidson’s most recent book is Spectators: Flash Fictions (Five Oaks, 2017), which Kirkus Reviews praises as “A small but mighty collection of textual snapshots… Flash fiction at its best.

Lynn Freed’s books include seven novels, a collection of stories, and two collections of essays—the latest of which is The Romance of Elsewhere (Counterpoint, 2017).

Jared Joseph Harvey is the author of, most recently, Drowsy. Drowsy Baby (Civil Coping Mechanisms, 2017). He lives in Santa Cruz.

Shawna Kay Rodenberg is a 10th-generation Appalachian from Kentucky. She earned her MFA from Bennington College, and her essays have been published in The Village Voice, Salon, and Consequence Magazine. She lives in Evansville, Indiana.

Colin Winnette is the prize-winning author of several books. His latest novel, The Job of the Wasp, is forthcoming from Soft Skull Press in January 2018.

Peg Alford Pursell is the author of  Show Her a Flower, A Bird, A Shadow, and the director and founder of Why There Are Words and WTAW Press.

Why There Are Words is an award-winning national reading series founded in Sausalito in 2010 by Peg Alford Pursell and now expanded to five additional major cities in the U.S., with more planned in the future. The series draws a full house of Bay Area residents every second Thursday to Studio 333 in Sausalito. The series is part of the 501(c)3 non-profit WTAW Press.

$10 at the door.  Cash bar.  Authors' books will be available for sale and signing.