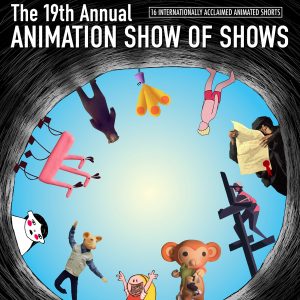 16 exceptional and inspiring animated shorts from around the world.

Curator and founder Ron Diamond will be in attendance on March 30 and 31 for a Q&A.

At a time of increasing social instability and global anxiety about a range of issues, the works in this year’s ANIMATION SHOW OF SHOWS have a special resonance, presenting compelling ideas about our place in society and how we fit into the world.

“Because animation is such a natural medium for dealing with abstract ideas and existential concerns, the ANIMATION SHOW OF SHOWS has always included a number of thoughtful and engaging films,” says founder and curator Ron Diamond. “However, more than in previous years, I believe that this year’s program really offers contemporary animation that expresses deeply felt issues in our own country and around the world.”