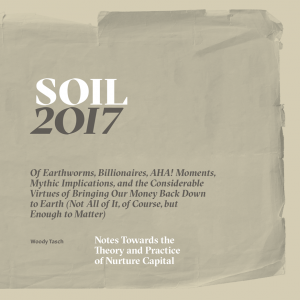 Woody Tasch - Soil: Notes Towards the Theory and P...

Since 2009, Slow Money founder Woody Tasch has been at the forefront of a new economic story—a story about bringing our money back down to earth.

And it’s not just a story, it’s a movement that has catalyzed the flow of more than $60 million to more than 625 small organic farms and local food businesses, via dozens of local groups in the United States, Canada, France and Australia.

Nurture capital is a vision of finance that starts where investing and philanthropy leave off, giving us a new way to reconnect to one another and places where we live, all the way down to local food systems and the soil.

About Woody Tasch:
Woody Tasch is the founder and chairman of the Slow Money Institute, a nonprofit dedicated to catalyzing the flow of capital to local food systems, connecting investors to the places where they live and promoting new principles of fiduciary responsibility that bring money back down to earth.

Since 2010, via local Slow Money networks in dozens of communities in the U.S. and a few in Canada, France and Australia, over $57 million has gone to 632 small, local and organic food enterprises.

Tasch is former chairman of Investors’ Circle, a nonprofit angel network that has facilitated more than $200 million of investments in over 300 early-stage, sustainability-promoting companies.