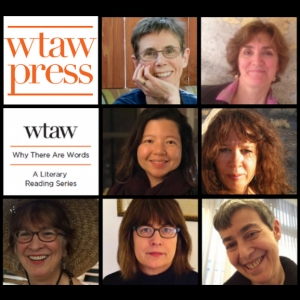 Why There Are Words: Warren Wilson MFA Alums

Alums from the Warren Wilson MFA Program for Writers read from their acclaimed works!

Join Why There Are Words at Studio 333 when alums from the Warren Wilson MFA Program for Writers read from their acclaimed works.

Mari Coates has published her stories in a variety of literary journals, and is grateful for residencies at I-Park, Ragdale, and Hypatia-in-the-Woods, where she developed and completed her first novel, The Pelton Papers.

Helen Fremont’s memoir After Long Silence (Delta, 2000) was a national bestseller, and a featured alternate of the Book-of-the-Month Club. Her work has appeared in numerous journals and anthologies, including The O. Henry Awards, Ploughshares, and The Harvard Review.

Marjorie Hudson is the author of Accidental Birds of the Carolinas (Press 53, 2011), a story collection that received a PEN/Hemingway Honorable Mention for Distinguished First Fiction. Her essay “Dear Joni” will be published in June 2018 in the anthology Idol Talk… from McFarland & Co.

Nancy Koerbel’s poems have appeared or are forthcoming in Redactions, One, and The Pittsburgh Poetry Review. A former recipient of a grant from the Pennsylvania Council on the Arts, she lives in Pittsburgh, where she teaches legal and business writing, works as a copyeditor for a large tech company, and coordinates the Pittsburgh branch of Why There are Words.

Karen Llagas’s first collection of poetry, Archipelago Dust, was published by Meritage Press in 2010. A recipient of a Hedgebrook Residency and a Dorothy Sargent Rosenberg Poetry Prize, she lives in San Francisco and works as a freelance translator & lecturer at UC Berkeley.

Alison Moore is the author of four books, the latest of which is Riders on the Orphan Train (Roadworthy Press, 2012). She is the Coordinator for the Austin branch of Why There Are Words.

Amelie Prusik is the author of the novel Light Sister, Dark Sister (Random House, 1994) and has published short fiction in The North American Review, America West, and Bosque, among others. Her chapbook, Octavia Street was published in 2017 by WTAW Press.

Why There Are Words (WTAW) is an award-winning national reading series founded in Sausalito in 2010 by Peg Alford Pursell and now expanded to six additional major cities in the U.S. with more planned in the future. The series draws a full house of Bay Area residents every second Thursday to Studio 333 in Sausalito.

The series is part of the 501(c)3 non-profit WTAW Press, publisher of award-winning exceptional literary books.