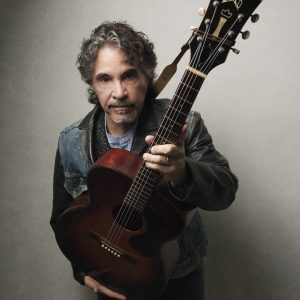 Half of Hall & Oates, the real deal – and he’s been working on a new solo album: “the most vital and satisfying solo project I’ve ever embarked upon.”

John Oates is one half of the best-selling duo of all time, Hall & Oates, as well as an accomplished solo artist.

Soaking up the sounds of the 60s, John was influenced by the nascent folk scene, bluegrass, delta blues, and ragtime guitar styles, while also immersing himself in R&B legends such as Otis Redding, Sam and Dave, The Temptations, Curtis Mayfield, and Smokey Robinson and the Miracles.

In the spring of 2017, Oates resumed work on an important music project that represents the next exciting phase in his burgeoning solo roots music career. The project is entitled Arkansas and is set for release in 2018.

Originally inspired by the music and legacy of the legendary Mississippi John Hurt, the project grew to encompass other artists and styles that represent the dawn of American popular music. Stylistically diverse and eclectic, the collection features a full band that was put together specially to bring the full range and flavors of classic American musical styles to life.

Oates crafted a number of original songs for the Arkansas album; selections actually inspired by the process of digging deep into the sonic soil of authentic roots music. “I really believe this is the most vital and satisfying solo project I’ve ever embarked upon,” Oates says of Arkansas. “Of all the music I have ever made with anyone, for me this album sits right up there.”