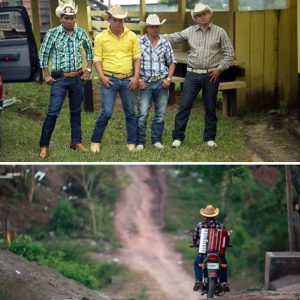 Tiburon Film Society presents “Olancho” [Honduras], about a group of musicians who perform for the powerful drug cartels there.

Olancho is the story of the most lawless province in Honduras, the most murderous country in the world. It is the story of a group of musicians who perform for the powerful drug cartels there.

Their songs glorify the traffickers who have destroyed their country, and who sometimes threaten the lives of their loved ones.

But in a world where the cartels wield the most power, do the musicians have any other choice?

Olancho is the largest province in Honduras. Located in the eastern part of the country, Olancho borders Nicaragua to the southeast. It has a rich history of agriculture and ranching. Olancho’s dry golden valleys are perfect for cattle farming and its high lush mountains are ideal for coffee cultivation. The province has always been infamous for the independent, resilient spirit of the farmers who work its land.

When international drug trafficking routes shifted a decade or so ago, Olancho became the strategic landing point for small aircraft carrying cocaine from South America towards the USA. Olancho’s tough culture was well adapted to this new business and its cartels became some of the most ruthless in Central America.

Olancho is where our musicians find themselves performing, living and surviving. In the documentary, they allow viewers to step into their gritty, complicated world and experience real life in rural Central America.

Free admission & open to the public