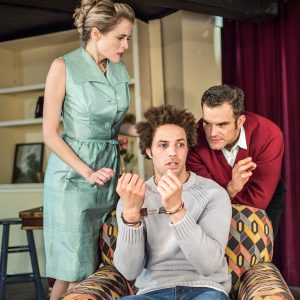 The third play of Ross Valley Players 89th season is Deathtrap, one of the great popular successes in Broadway history.

Count the murders in this comic thriller…and you’ll be wrong.  Deathtrap twists and turns with devilish cleverness, thrills and plenty of laughter along the way.  Nominated for 4 Tony Awards, Deathtrap ran on Broadway for a record four years.

“It’s a challenge to write much about Deathtrap without revealing the secrets of its plot, so instead I will talk about why I have chosen to set our production in the early 1960s, with a “technicolor Hitchcock film” theme in mind. When this play premiered in 1978, it was considered contemporary, however, to a 2019 audience, it will appear charmingly dated.

Through the lens of modern technology, key plot points such as the absence of the “carbon copy” of a typewritten manuscript will lack credibility. I see this as a marvelous opportunity to embrace a sense of pre-digital nostalgia and set the play back a few years, to a stylized version of an era in which the available technology is the same, but the setting more entertainingly matches the play’s genre and the many Hitchcock-era films and plays Ira Levin’s script seems to pay homage to.”