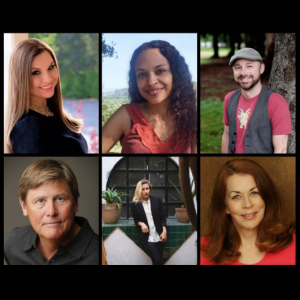 Why There Are Words: Familiar

Join Why There Are Words for a familiarly spectacular night of readings as six acclaimed authors read on the theme of “Familiar.”

For more details, including the authors’ full bios and publishers, see our website. The reading series is a program of WTAW Press.

Jasmin Darznik is the author of the New York Times bestseller The Good Daughter: A Memoir of My Mother’s Hidden Life. Her debut novel Song of a Captive Bird is a fictional account of Iran’s trailblazing woman poet, Forugh Farrokhzad.

Christina Hoag was a foreign correspondent in Latin America for nearly a decade, writing for Time, Business Week, New York Times, among many others. She is the author of the noir crime novel Skin of Tattoos and Girl on the Brink. She also writes nonfiction, co-authoring Peace in the Hood: Working with Gang Members to End the Violence.

Miah Jeffra is author of the collections The First Church of What’s Happening and The Fabulous Ekphrastic Fantastic! (forthcoming). Recent publications include The North American Review, Fourteen Hills Review, and The Nervous Breakdown. He is founding editor of queer literary collaborative, Foglifter Press.

Kimberly Kruge is a poet and translator based in central Mexico. She is the author of Ordinary Chaos and High-Land Sub-Tropic. Her poems have appeared in Ploughshares, The Iowa Review, The Missouri Review, and many other publications. She works to bring poetry in English and Spanish to new readers through translation and the organization of collaborative projects between writers from different countries.

Rolf Yngve’s first collection Dog Watches was recently published in December 2018. He first published short stories in the 1970’s when his work appeared in journals and anthologies including Best American Short Stories. After retiring from thirty-five years in the US Navy, he returned to the arts with publication in a number of journals including prize stories published in Indiana Review, Glimmer Train, Bosque Journal, and others.

Why There Are Words (WTAW) is an award-winning national reading series founded in Sausalito in 2010 by Peg Alford Pursell, now expanded to seven additional major cities in the U.S. The series draws a full house of Bay Area residents every second Thursday to Studio 333 in Sausalito. The series is a program of the 501(c)(3) non-profit WTAW Press. For more information please see the website, email or call.