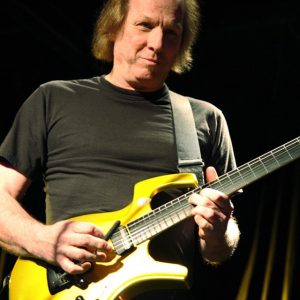 The legendary guitarist from Frank Zappa and King Crimson, with Saul Zonana

Adrian Belew is a legendary guitarist well-known for his diverse travels around the musical map. He is a multi-instrumentalist whose solo records are critically acclaimed.

Adrian first appeared on the guitar-world radar when he toured with Frank Zappa who later said, “Adrian reinvented electric guitar”.

Adrian’s signature tones, unique use of effects and whammy bar remains completely different, and his techniques continue to be a huge influence on today’s guitarists. He was guitarist, songwriter and frontman Progressive Rock Powerhouse King Crimson for over 30 years. “Discipline”, Adrian’s first record with King Crimson, is listed among the most important rock records ever made.

Meanwhile, Belew continues work on the latest additions to his FLUX project, including an album called FLUXbybelew and an in-app addition entitled FLUXation. FLUX is ‘music which is never the same twice’.

Veteran artist and multi-instrumentalist, Saul Zonana, has been touring and releasing his quirky brand of pop-rock music for over thirty years now. His prolific and extensive career includes ten solo albums, with commercial radio success from his “WAVES” album and the still popular “BLUE MONKEY“.

Teaming up with guitar icon Adrian Belew in 2006, Saul created his “42 Days” CD to critical acclaim. “Chasin’ It” is still a fan favorite from that album, as is the music documentary which aired on PBS.

Saul toured on bass with The Ace Frehley Band, and on guitar with the Crash Test Dummies. As a solo support artist, Saul has toured with Leon Russell, Glenn Tilbrook, Lisa Loeb, The Spin Doctors, Adrian Belew Power Trio 2006-2008 and many others. In the studio, Saul has worked with many great artists including Taylor Dayne, Blue Oyster Cult, and American Idol finalist Haeley Vaughn.

Adrian Belew fans know him well as the recording engineer on Belew’s “Side Four: Live” as well as the groundbreaking Belew Power Trio studio album “e”.