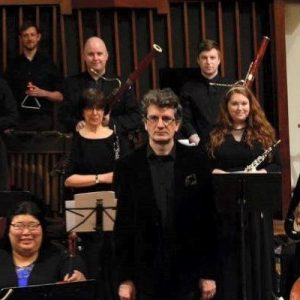 ECHO Chamber Orchestra: There and Back Again

ECHO Chamber Orchestra begins its fifth season on September 22 with “There and Back Again” — a concert of four delightfully contrasting works at the First Presbyterian Church of San Anselmo.

* Nonet, an 1849 work by the little-known Louise Farrenc, and

* the Third Symphony of Franz Schubert.

City Suite is a collaboration between ECHO Conductor Daniel Canosa and bass player/composer Kevin Gordon. “It was written specifically for the ECHO Chamber Orchestra and is loosely based on a baroque suite with each movement inspired by a different city,” said Gordon.

A complimentary wine reception and art exhibition will take place after the performance.

Tickets are $15-$35 and available online and at the door prior to the concert.

Under the leadership of Music Director and Conductor Daniel Canosa, ECHO has garnered accolades for its artistry and collaborative, community-minded programming. ECHO’s 2019-20 season continues on February 16 with a commissioned work by San Francisco composer Belinda Reynolds paired with a Mozart Piano Concerto featuring pianist Laura Magnani; and on June 14 the orchestra plays music by the Brazilian flutist and composer Léa Freire.

Tickets also available at the door