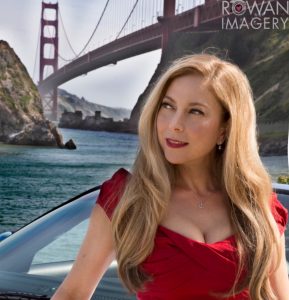 Shana Morrison’s musical style has been called pop with a side of blues and a side of rock. She has also been known to include other ingredients, like country, R&B, and jazz into the mix.

An accomplished singer/songwriter, she sings a blend of her own compositions and the songs she grew up with: the music of Van Morrison.

With the sheer energy of her strong voice, audiences cannot restrain themselves from dancing. Good thing that George’s has installed a new dance floor as well as a new sound system!

She is the fifth act booked by Friends Productions for the “Women in Music” series where all acts have had female lead singers.

New management at the legendary nightspot, along with Friends Productions, is bringing back music in prime time as in earlier days when the venue played host to, among others: Jefferson Airplane, Grateful Dead, Santana, Huey Lewis & the News, Bonnie Raitt, and Melissa Etheridge.

Cuisine is crafted by Tuscan born chef/manager Elena Fabbri and her Yucatán born husband Gustavo, for this, Marin’s only Yucatán restaurant/bar.