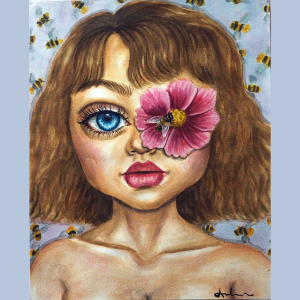 Andrea Flores, an 18-year-old self-taught artist, opens her first solo exhibition, titled Dreamer Eyes, at Firehouse Coffee & Tea, 317 Johnson St. in Sausalito on August 29. The artist stated that “dreams and hopes are reflected in the young girl’s eyes.” An opening reception will be held September 15 from 3-6 pm.

Born in in Guadalajara, Mexico, she and her family moved to San Anselmo when she was 4 years old. Already a highly-accomplished artist, Andrea won First Place in the 2018 Youth Poster Contest for her poster My American Dream, a piece that reflects the hopes and dreams of immigrant children, an issue that hits close to home for her.

In 2019 she won the Producer’s Award as a part of the same contest for her poster The Last Straw, a piece that pictures a turtle covered in garbage, which was created to raise awareness about plastic waste and climate change.  She has also won First Place in the Marin County Fair for the past two consecutive years.

Her artwork has been exhibited in group shows throughout the Bay Area, including exhibitions at the Marin Museum of Contemporary Art, the David Brower Center in Berkeley, the Haight Street Art Center in San Francisco, Marin Civic Center Galleries, Marin County Fair, RileyStreet Art Supplies, and more.