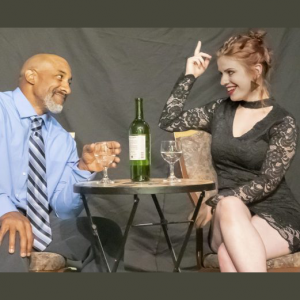 Presented by JoLee Productions at The Belrose

A dark comedy: love and family on a collision course, farce and drama breaking the 4th wall

Incorporating theatrical techniques pioneered by Chicago’s Second City comedy troupe, the play alternates between farce and drama breaking down the fourth wall as the drama builds, including the audience as a confidant/witness.

Bluff tells the story of Emily and Neal who are doing fine as a new couple in the West Village of New York until her brash and vulgar stepfather comes to town for a convention. Gene (stepfather) brings with him all the contradictions Emily has been trying to bury.