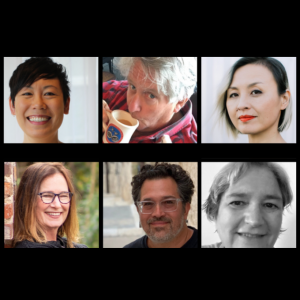 Why There Are Words: Glimmerings

Nancy Au’s essays and stories appear in many journals including Redivider, Gulf Coast, Lunch Ticket, and Michigan Quarterly Review. She teaches creative writing (to biology majors) at California State University, Stanislaus, and at San Francisco State University. She is co-founder of The Escapery, a writing and art unschool. Her debut full-length collection is Spider Love Song & Other Stories, (Acre Books, September 2019).

Guy Biederman is the author of Edible Grace (KYSO FLASH 2019), Soundings & Fathoms, House Samurai, and Parts & Labor. Over 100 of his stories and poems have appeared in journals such as Carve, Blue Fifth Review, and Flashback Fiction. A story midwife since 1991, Guy began writing during a war in Guatemala, and later studied at San Francisco State, where his teaching career began. He lives on a houseboat and walks the planks daily.

Mimi Lok is the author of the debut story collection Last of her Name (October 2019, Kaya Press), which has been called “a mesmerizing debut that affirms all that is great about short fiction” (Dave Eggers), “poignant” (Gish Jen), and “darkly funny” (Rachel Khong). Her writing has been published or is forthcoming in McSweeney’s, Electric Literature, Lucky Peach, and elsewhere. She is also the director of Voice of Witness, a nonprofit that amplifies marginalized voices through its oral history book series and national education program.

Cynthia Newberry Martin holds an MFA from Vermont College of Fine Arts. She has served as the review editor for Contrary Magazine and the writing life editor for Hunger Mountain. Her website features the How We Spend Our Days series, over a decade of essays by writers on their lives. She grew up in Atlanta and now lives in Columbus with her husband, and in Provincetown, Massachusetts, in a little house by the water. Tidal Flats is her first novel.

Tomas Moniz edited Rad Dad, Rad Families, and the kids book Collaboration / Colaboración. He’s recently been published by Barrelhouse and Longleaf Review. In July 2019, he released a chapbook with Mason Jar Press and his debut novel, Big Familia, will be out from Acre Books in November. He loves letters and penpals: PO Box 3555, Berkeley CA 94703. He promises to write back.

Marcia Pelletiere is a poet, singer / composer, and interdisciplinary artist. Her second poetry collection is A Crown of Hornets (Four Way Books, Spring 2019). The book reflects her journey of recovery from a Mild Traumatic Brain Injury (MTBI). She also offers presentations about that experience to medical professionals and the general public with the goal of raising awareness about this devastating and often invisible injury. Her poems and poetry videos have appeared in publications and video poetry festivals including Ploughshares; JAMA; Prairie Schooner; Light Up Poole Digital Art Festival; Bath Film Festival, Southern Poetry Review; South Florida Poetry Journal; and Painted Bride Quarterly.

Why There Are Words (WTAW) is an award-winning national reading series founded in Sausalito in 2010 by Peg Alford Pursell and expanded to seven additional major cities in the U.S. The series draws a full house of Bay Area residents every second Thursday to Studio 333, located at 333 Caledonia Street, Sausalito, CA 94965. The series is a program of the 501(c)(3) award-winning non-profit WTAW Press.