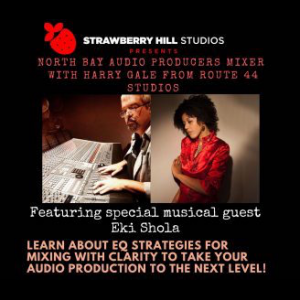 Learn EQ strategies for mixing with clarity – take your audio production to the next level!

Our special guest this time will be Route 44 Studios' owner & engineer Harry Gale, featuring a special performance from Eki Shola.

Route 44 Studio, is owned and operated by engineer / producer Harry Gale and for nearly 30 years, he has been working with musicians from around Sonoma County as well as the world over to help them realize their musical aspirations. Harry brings musical insight and willingness to listen and guide, along with a focused, intuitive ability to the craft of audio production.

Route 44 Studio is nestled in the rural setting of Sebastopol, CA and is what some might coin a boutique studio. While small in size, it has proven to offer LARGE production value. Some of their previous clients include Ben Harper, Warren Haynes, Elvin Bishop, and Charlie Musselwhite to name a few. In a nutshell, Route 44 is a place where musicians come to get the music DONE!

Eki Shola (Eh-key sounds like Becky without the B, Show-lah): she is a gift from God. Seriously, that is the meaning of Eki. Truthfully, she was a little deflated when 20+ years later she traveled to Japan and kept seeing “Eki” at every train stop. Eki means station in Japanese.

Born in London and given a Nigerian name by Jamaican parents, they later emigrated to New York in the late 1980s. Eki feels that Jamaica is her cultural roots; London the place where she remembers her childhood memories; and New York City the place that offered amazing gritty life adventures. For now, California is Eki's current abode – a beautiful place with an abundance of glorious weather.

Eki's main love is music and as a keyboardist and singer, she enjoys sharing her music with others. As a solo artist, she composed, produced and released her debut album, Final Beginning, on August 20, 2016. This year she began releasing her Pieces trilogy album, with the first album, Possible, released on 2/22/19.

Tickets available by pre-registration on Eventbrite for $10.

Snacks & drinks will be provided.