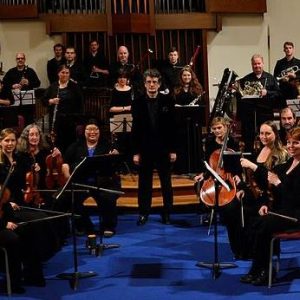 ECHO Chamber Orchestra presents its second concert of the 2019-20 season, entitled Inside Out on Sunday, February 16 at 7:30 pm at the First Presbyterian Church of San Anselmo.

Pianist Laura Magnani will perform Mozart’s Piano Concerto No. 20 in D Minor, K 466 – a towering work, even for Mozart, that expresses the entire range of human emotion.

Magnani hails from Spoleto, IT, and has performed many times at that town’s Festival of the Two Worlds. Since moving to California in 2013, Ms. Magnani has performed with organizations including Stanford University, Silicon Valley Italian Festival, San Francisco’s Museo Italoamericano, Leonardo da Vinci Society, Old First Church and 405 Shrader, Berkeley’s Town and Gown, and Marin County’s Musica Marin.

ECHO percussionists Alapaki Yee and Christian Foster Howes will be featured in their percussion duet KAIZEN. According to the Hawaiian-born Yee, “kaizen” is a Japanese word that means “change for better” or improvement. “It’s a philosophy I hold dear in everything I do, especially in the art of music,” Yee said. “If you listen closely, you will hear Taiko drumming-inspired rhythm and technique.”

The orchestra will regroup to perform Louise Farrenc’s Symphony No. 3 in G Minor. ECHO introduced Farrenc’s music last September by performing her Nonet for flute, oboe, clarinet, horn, bassoon, violin, viola, cello and bass. Composed in 1847 and premiered in Paris in 1849, Farrenc’s G minor Symphony has “all the variety and energy of any Mendelssohn, Beethoven, or Schumann – and we never think of those symphonies as ‘male’” (Luke Smith, Chicago IL).

Audience members are invited to a reception and art show after the performance, where original works by Sonoma County artist Jerry Wilson will be on sale.