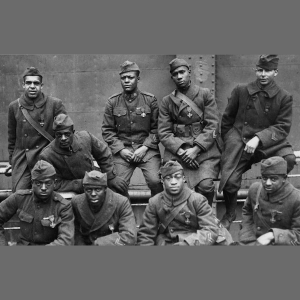 By the end of 1917 a regiment of African-American soldiers had entered the trenches in France. They were the 15th regiment of the New York National Guard and exclusively made up of black soldiers, nicknamed the "Harlem Hellfighters."

Under French command, these men discovered both the horrors of war and a world where racial segregation did not exist. Their unit became one of the most decorated of World War I.