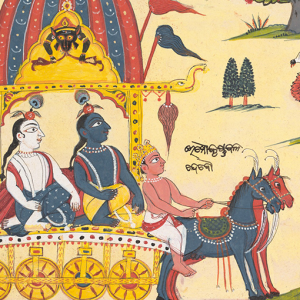 As a species and a culture, we are currently facing catastrophic, overwhelming climate change and massive, unprecedented human migration.

The Commonwealth Club and UC Berkeley's Townsend Center for the Humanities are partnering in 2020 for an innovative and stimulating series of conversations about the role of story—as literature, history, poetry, painting and architecture—in the face of catastrophe.

Catastrophe and Storytelling brings together internationally known humanities scholars from UC Berkeley and prominent figures from the Bay Area arts community to discuss the responsibilities of art in catastrophic times and the relationship between catastrophic moments and civilizational collapse. Ranging from the art of early modern India to that of contemporary America, from Homer’s Illiad to the Book of Exodus, from Stoic philosophers to colonial settlers, these discussions between artists and scholars will invite and inspire you to contemplate and rethink the role of art and literature in your life and world.

The series will launch on Tuesday, March 3 with a discussion between Townsend scholar Sugata Ray and visual artist Ranu Mukherjee. In his most recent book, Climate Change and the Art of Devotion, Ray shows how a site-specific and ecologically grounded theology emerged in northern India in the wake of the Little Ice Age (ca. 1550–1850), an epoch marked by climatic catastrophes across the globe. His interests dovetail in unexpected and compelling ways with Mukherjee’s visionary and captivating recent work, which positions the banyan tree as a meeting point between ecology and culture.

Their conversation will be a fascinating inquiry into the relationship between nature and the sacred and the rise of the Anthropocene era over the last several centuries of human civilization.

Sugata Ray is associate professor of South and Southeast Asian art in the history of art department at UC Berkeley. His research and writing focus on climate change and the visual arts from the 1500s onwards. Ray is the author of Climate Change and the Art of Devotion: Geoaesthetics in the Land of Krishna, 1550–1850 (2019); Water Histories of South Asia: The Materiality of Liquescence (2019, co-edited); and Ecologies, Aesthetics, and Histories of Art (forthcoming, co-edited).

Ranu Mukherjee is a visual artist who makes paintings, animations and large-scale installations. Her current work focuses on shifting senses of ecology, nonhuman agency, diaspora, migration and transnational feminist experience. Her most recent installation was presented at the ecologically focused 2019 Karachi Biennale; she has exhibited solo at the San Jose Museum of Art, the Los Angeles Museum of Contemporary Art, the Asian Art Museum and the de Young Museum. She is an associate professor in graduate fine art at the California College of the Arts. Mukherjee is represented by Gallery Wendi Norris.