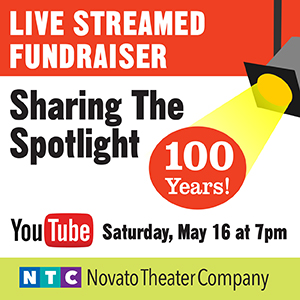 An evening of special performances by NTC stars highlighting their most memorable shows and raising money to sustain the 100-year-old community theater.

In recognition that nearly all of Marin’s community theaters share talent, audiences and resources, NTC will celebrate their theater plus all of the local theater groups that have supported NTC through the years. They have invited the best talent in the community to perform numbers from past shows.  These stars will invite the viewers into their homes (virtually) to sing and perform.  As of now, the featured performers include Daniela Innocenti Beem, Carl and Kelly Robinett, Julianne Thompson Bretan and Jon Bretan, Alison Peltz and Family, Jake Gale, Tyler Marques, and Heather Buck. More to be added.

Videos From The Archives!

NTC will also be showing some of their best songs from previous shows, based on requests.  Nominations for favorite songs from previous shows can be sent to Songbook@NovatoTheaterCompany.org.  NTC will also be featuring a sneak preview from their next production (which was also their last production before the theater had to close): The Who’s TOMMY

NTC will have many great auction items, including a voyage on the Matthew Turner, the newest Tall Ship in the world.

The Novato Theater Company is asking that interested sponsors consider donating an auction item or money.  Donors will be acknowledged during the broadcast and large donations additionally on the NTC website.