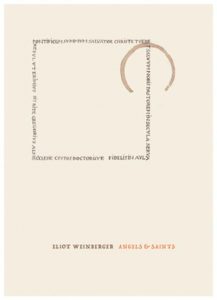 A celebration of Weinberger’s book of essays, with illustrations by a Benedictine monk

Eliot Weinberger, called “one of the world’s greatest essayists” by the New York Times, is joined in conversation by Pulitzer Prize winner Forrest Gander to celebrate the publication of Angels and Saints (New Directions).

This is a free event, though we encourage you to pay what you can or to order the book from us to support the bookstore during these challenging times.

About Angels and Saints
Angels have soared through Western culture and consciousness from Biblical to contemporary times. But what do we really know about these celestial beings? Where do they come from, what are they made of, how do they communicate and perceive? The celebrated essayist Eliot Weinberger has mined and deconstructed, resurrected and distilled centuries of theology into an awe-inspiring exploration of the heavenly host.

From a litany of angelic voices, Weinberger’s lyrical meditation then turns to the earthly counterparts, the saints, their lives retold in a series of vibrant and playful capsule biographies, followed by a glimpse of the afterlife.

Eliot Weinberger “one of the world’s greatest essayists” (The New York Times), has been publishing books with New Directions since 1975, most recently The Ghosts of Birds.

Forrest Gander, born in the Mojave Desert, lives in California. A translator and writer with degrees in geology and literature, he’s the recipient of numerous awards, among them the Pulitzer Prize, the Best Translated Book Award, and fellowships from the Library of Congress, the John Simon Guggenheim Foundation, and United States Artists.