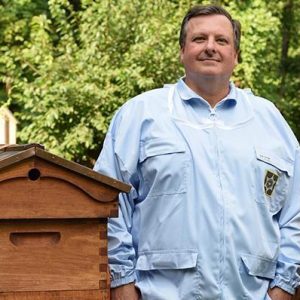 Featured Book: Bee People and the Bugs they Love

Who wants to keep bees? And why?

For the answers, Master Beekeeper Frank Mortimer invites readers on an eye-opening journey into the secret world of bees, and the singular world of his fellow bee-keepers.

Frank also crosses paths with those he calls

In connecting with this club of disparate but kindred spirits, Frank discovers the centuries-old history of the trade; the practicality of maintaining it; what bees see, think, and feel (emotionless but sometimes a little defensive); how they talk to each other and socialize; and what can be done to combat their biggest threats, both human (anti-apiarist extremists) and mite (the Varroa Destructor).

With a swarm of offbeat characters and fascinating facts (did that bee just waggle or festoon?), Frank the Bee Man delivers an informative, funny, and galvanizing book about the symbiotic relationship between flower and bee, and bee and the beekeepers who are determined to protect the existence of one of the most beguiling and invaluable creatures on earth.

Frank Mortimer is an adjunct instructor at the Cornell University Master Beekeeping Program, Vice President of the New Jersey State Beekeepers Association, and a certified master beekeeper. As president of the Northeast NJ Beekeepers Association since 2011, he has significantly grown his club’s membership; aligned the Northeast NJ Beekeepers with Ramapo College; founded the “Honey Cup,” an annual honey tasting competition, and promoted beekeeping throughout the Northeast. Frank has published multiple articles in Bee Culture Magazine and has led beekeeping seminars across New Jersey and at The New York Botanical Garden. In addition, he successfully campaigned for his hometown of Ridgewood to become New Jersey’s first “Bee City USA.” Frank is married, has three children, and beekeeping is something the whole family enjoys doing together.