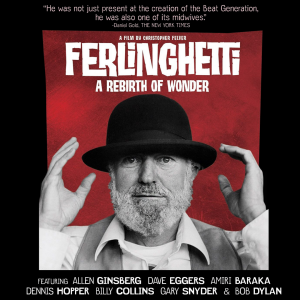 LOCAL>> Ferlinghetti: A Rebirth of Wonder

While the Bay Area mourns the loss of one of its greatest icons, Lawrence Ferlinghetti, we are pleased to offer this film in memory of the 101-year-old legend.

Director Christopher Felver has presented his documentary Ferlinghetti: A Rebirth of Wonder a few times in person at the Rafael. On the first occasion, Lawrence Ferlinghetti was scheduled to participate onstage. He had to cancel at the last minute, but he did send a capable stand-in to substitute for him: fellow poet Michael McClure.

In this definitive documentary, director Christopher Felver crafts an incisive, sharply wrought portrait that reveals Ferlinghetti’s true role as catalyst for numerous literary careers and for the Beat movement itself. One-on-one interviews with Ferlinghetti, made over the course of a decade, touch upon a rich mélange of characters and events that began to unfold in postwar America.

These events include the publication of Allen Ginsberg’s Howl, William S. Burroughs’ Naked Lunch, and Jack Kerouac’s On the Road, as well as the divisive events of the Vietnam war, the sexual revolution, and this country’s perilous march towards intellectual and political bankruptcy.