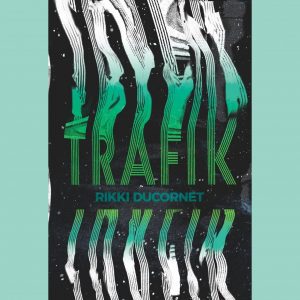 Author talks about her new novel with another of our favorites, Jeff VanderMeer

“Surrealism meets space opera in Trafik, Rikki Ducornet’s startlingly original look at a post-human and non-human pairing wandering through space while obsessed with the scattered fragments of a world they never knew.

At once funny and absurd, Trafik peers at our own time through the lens of the future to reveal what we should regret losing and what would be better gone.” —Brian Evenson

This free event will be streamed on our Crowdcast channel.

About Trafik
From the singularly inventive mind of Rikki Ducornet, Trafik is a buoyant voyage through outer space and inner longing, transposing human experiences of passion, loss, and identity into a post-Earth universe.

Quiver, a mostly-human astronaut, takes refuge from the monotony of harvesting minerals on remote asteroids by running through a virtual reality called the Lights, chasing visions of an elusive red-haired beauty. Her high-strung robot partner, Mic, pilots their Wobble and entertains himself exploring his records of the obliterated planet Earth, searching for Al Pacino trivia, unfamiliar recipes, and high fashion trends.

But when an accident destroys their cargo, Quiver and Mic go rogue, setting off on a madcap journey through outer space towards an idyllic destination: the planet Trafik.

Rikki Ducornet is a transdisciplinary artist. Her work is animated by an interest in nature, Eros, tyranny and the transcendent capacities of the creative imagination. She is a poet, fiction writer, essayist, and artist, and her fiction has been translated into fifteen languages. Her art has been exhibited internationally, most recently with Amnesty International's traveling exhibit I Welcome, focused on the refugee crisis.

Jeff VanderMeer is the author of Dead Astronauts, Borne, and The Southern Reach Trilogy, the first volume of which, Annihilation, won the Nebula Award and the Shirley Jackson Award and was adapted into a movie by Alex Garland starring Natalie Portman. VanderMeer speaks and writes frequently about issues relating to climate change. He grew up in the Fiji Islands and now lives in Tallahassee, Florida, with his wife, Ann VanderMeer, and their cats, plants, and bird feeders.