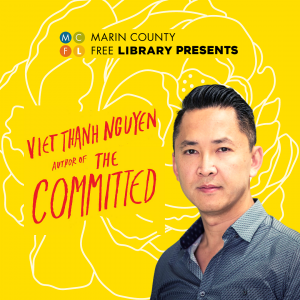 Join us for this special interview with acclaimed author, Viet Thanh Nguyen!

Viet Thanh Nguyen’s novel The Sympathizer won the Pulitzer Prize for Fiction and numerous other awards.

His most recent publication is the sequel to The Sympathizer: The Committed.

His other books are a short story collection, The Refugees; Nothing Ever Dies: Vietnam and the Memory of War (a finalist for the National Book Award in nonfiction and the National Book Critics Circle Award in General Nonfiction); and Race and Resistance: Literature and Politics in Asian America.  He has also published Chicken of the Sea, a children’s book written in collaboration with his six-year-old son, Ellison.

He is a University Professor, the Aerol Arnold Chair of English, and a Professor of English, American Studies and Ethnicity, and Comparative Literature at the University of Southern California. A recipient of fellowships from the Guggenheim and MacArthur Foundations, he is also a contributing opinion writer for the New York Times and the editor of The Displaced: Refugee Writers on Refugee Lives.