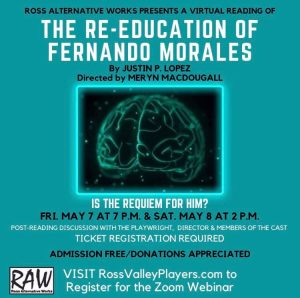 LOCAL>> The Re-Education of Fernando Morales...

Ross Alternative Works presents a virtual reading of a new original play, followed by post-reading discussion with the playwright, director and cast members.

When young Fernando Morales is sent away by his family to a place that can “fix him,” he becomes split between the past, present, and future.

Surrounded by flashes of electricity, love, and Mozart’s Requiem, he searches through time for some way to save himself.

Will he succeed, or is the Requiem for him?

Justin P. Lopez is an actor, singer, writer, and boba-milk-tea enthusiast, who is passionate about new works and loves finding true connection and humanity in each script and song. As an actor, recent credits include the world premieres of Kiss My Aztec! (Berkeley Repertory Theatre) and Unbreakable by Andrew Lippa (SFGMC). Other favorite roles include Anthony (I And You), Claudio (Much Ado About Nothing), and Juan Perón (Evita). As a writer, Justin is a proud member of The Playground Experiment (PGE). His work has been featured by the PGE, Permafrost Theatre Collective, Custom Made Theatre Company, and The Pear Theatre.

Meryn – "I want to thank Eileen and Kelsey for all the hard work and support. I also want to thank Justin for writing and sharing this very important and brave script. I believe that creating access to diverse work is important. I will continue to educate myself about diversity, equity, and inclusion."

The reading is free but donations are appreciated.

Donate here and please place "RAW" in the donation notes.