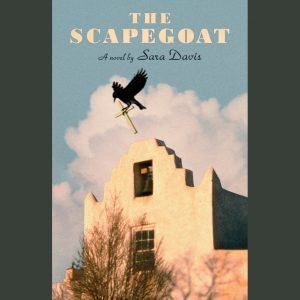 Sara Davis and Hilary Leichter celebrate the release of her debut novel, The Scapegoat

The novel gets at the terrifyingly convincing lies (or stories) that we tell ourselves, inevitably about that which we most need to know.

The Scapegoat made me fall in love again with the form of the novel!" —Rivka Galchen, author of Little Labors

About The Scapegoat
N is employed at a prestigious California university, where he has distinguished himself as an aloof and somewhat eccentric presence. His meticulous, ordered life is violently disrupted by the death of his estranged father—unanticipated and, as it increasingly seems to N, surrounded by murky circumstances.

His investigation leads him to a hotel built over a former Spanish mission, a site with a dark power and secrets all its own. On campus, a chance meeting with a young doctor provokes uncomfortable feelings on the direction of his life, and N begins to have vivid, almost hallucinatory daydreams about the year he spent in Ottawa, and a shameful episode from his past.

Meanwhile, a shadowy group of fringe academics surfaces in relation to his father’s death. Their preoccupation with a grim chapter in California’s history runs like a surreal parallel to the staid world of academic life, where N’s relations with his colleagues grow more and more hostile.

As he comes closer to the heart of the mystery, his ability to distinguish between delusion and reality begins to erode, and he is forced to confront disturbing truths about himself: his irrational antagonism toward a young female graduate student, certain libidinal impulses, and a capacity for violence. Is he the author of his own investigation? Or is he the unwitting puppet of a larger conspiracy?

With this inventive, devilish debut, saturated with unexpected wit and romanticism, Sara Davis probes the borders between reality and delusion, intimacy and solitude, revenge and justice. The Scapegoat exposes the surreal lingering behind the mundane, the forgotten history underfoot, and the insanity just around the corner.

Sara Davis, the daughter of two Stanford immunologists, grew up in Palo Alto, California and received her BA and MFA at Columbia University. She has taught creative writing in New York City and Detroit. She has been awarded residencies from Ucross, Vermont Studio Center, and Ragdale. She lives in Shanghai, China. The Scapegoat is her first book.

Hilary Leichter is author of the novel Temporary. Her writing has appeared or is forthcoming in the New Yorker, Harper's, n+1, Bookforum, Conjunctions, the Cut, and American Short Fiction. She teaches at Columbia University.