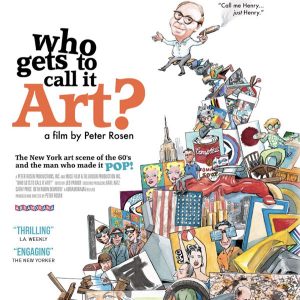 A wild ride through the 1960’s downtown New York art scene as seen through the eyes of legendary Metropolitan Museum of Art curator, Henry Geldzahler.

Henry Geldzahler, an art historian fresh out of Yale and Harvard, enters the New York scene in 1960, the year JFK was elected. These were optimistic and exciting times. Artists, living in cheap downtown lofts were breaking from the influence of Europe and Abstract Expressionism. Something entirely new was happening. Something purely American.

The 60s were experimental times. All assumptions were questioned and rules broken. The vanguard audience went to all the openings, happenings and parties, blending the social world and the art scene. And Henry quickly became a familiar figure downtown.

In 1970, Henry Geldzahler, the young curator of contemporary art since 1962 at The Metropolitan Museum of Art, mounted the largest exhibition of modern art ever shown at the museum: “New York Painting and Sculpture 1940-1970.”